Growing up, my Gramma was always making things, not only cooking and baking, but she was an artist at embroidery. She set to work making each of her eight grandchildren keepsakes they could eventually use for their own homes when they became adults. She embroidered tea-towels and a tablecloth. My sister’s, brother’s, and mine sat in my Mom’s hope chest while we were growing up. When I finally moved to my own little house with my very own kitchen, I broke out the mementos my grandmother had worked so lovingly on. And also a small hat shaped pincushion my great aunt Marie (other side of the family) had crocheted.

I use the pincushion. But let’s be honest, I don’t sew and I’m pretty useless when it comes to even trying to fix a small whole, but I still bought needles just so I could stick them in this little hat pincushion. Mint green (as I’ve mentioned before as a favorite color of mine) was my favorite color growing up, along with peach. So those are the colors she made mine. She was a fun lady who was always a treat to visit. She never forgot a birthday, confirmation, etc. I’m thankful for this small gift from her I’m able to still use.

The tablecloth I don’t use, well, because I don’t have a table. I laid it out over the coffee table to take the photo. So it sits in it’s zipped garment bag and lays on the shelf in my small hutch. But I often fantasize about a small personal dinner party with the dishes laid out in front of my close friends with the tablecloth as the canvas to a fabulous meal. And of course, I’m wearing one of my 1950s inspired dresses with my apron over it, mixing cocktails for all until dinner is ready to be served! A girl can dream. 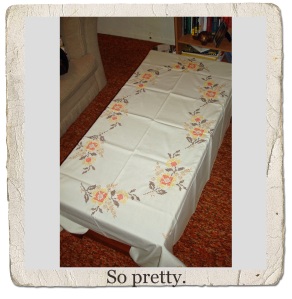 The tea-towels I use. Which is apparently not the consensus of what to do with them. I suppose the fact mine now have stains on them is probably a no-no, but I feel the point is to use them. When I have those towels hanging on the handle of my oven, it almost makes me feel like there’s a little part of my Gramma there. If she were still here (and came across the country to visit), she could walk into my house and be proud to see me using what she made so long ago when I was just a little girl. And the fact that using them each day means more to me than it being just some dishtowel. Like most things, I like them a little worn, a little stained, and some character added into them from my specific use. Plus, otherwise, they would just be sitting in some drawer. Seems quite futile. One of my favorite symbols is a butterfly, even when I was younger. (The notion of a butterfly drunkenly fluttering in the sunshine has always made me smile.) So each towel has a day of the week with a butterfly and some flowers on it. (Even with these, I still never know what day it is. Go figure.)

As I am in my kitchen baking cookies, or cutting up some fruit, or boiling some water for green tea, the tea-towel will catch my attention, and I’ll think of her. I’ll wonder what she was thinking while she was making all these things for the grand kids. (I also wonder how long it took her to do all of these, and eight times at that!) Her love, her words, and the memories she left with me would be enough to sustain her in my heart and my mind, but I am so grateful she chose to do this simple act for us. (Especially for a nostalgist like me!) I’ll wonder if she realized how much it would mean, the feelings it would provoke, and the place it would hold in my already sentimental life. Embroidery was something she learned as a girl from her mother. It was a hobby, a way to pass the time, a time before television, even before electricity. This skill she was talented at and quite clearly enjoyed, as well, she chose to share with her grandchildren. Maybe not in the way of teaching us how to do it ourselves, but giving us an example of her workmanship. Each stitch shows her skill and her experience with embroidery, but also speaks to the loving woman and fun grandma that she was. 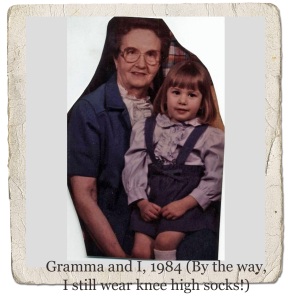 2 thoughts on “Stitches of Love”