Before I ever started school, I would accompany my Mom and my Gramma to the grocery store to stock up on food and essentials. My Mom would throw me in the backseat (not literally) and we would drive up the road to pick my Gramma up. She would climb into the front seat, dig through her purse, and hand me a half a piece of Trident gum. There may be some debate on when to give a child gum, but that was a highlight for me. We would then drive to town to go to the only grocery store.

Mom would grab a shopping cart and ask me if I wanted to push it. Gramma would grab her shopping cart, and I would squeeze my way between her and the cart handle. Sorry, Mom, Gramma was the inevitable choice. (I still love you though, Mom!) We would start at one end of the store, the fresh produce section, making our way up and down aisles, filling the carts and contemplating anything extra that caught our eye. Until finally, we made it to the last aisle in the store. The aisle containing the greeting cards and the cookies. That aisle signaled the end of our grocery shopping adventure, and that was when, on each trip, my Gramma would buy me a box of animal crackers. Between the gum and the crackers, I was in kid heaven, and so excited to get such treats. It became a tradition of sorts with us, and clearly meant the world to me, seeing as I remember it today, like it was yesterday.

I see bags of animal crackers a lot, they seem to be prevalent. However, the boxes I don’t see much anymore. In fact, I hadn’t seen one in the longest time until last week. I saw the boxes in a wire basket at the end of an aisle, and my mouth dropped, then turned into a smile. So of course I bought one.

As a kid, opening that box and tearing into the plastic bag inside was the beginning of a ritual, a drawn out performance of imagination, tricks, and consumption. I would take each cracker out to see which animals I had gotten. Then I would group them accordingly. (They had to be with their families, right?) Sometimes they would be a part of the circus, as they are marketed, others they would be in the zoo, and other times out in the wild.

Often the lion would go for the jugular of the zebra, especially if the zebra was the lone one because it had gotten separated form the herd. The monkeys would climb the furniture or the plants, the elephants would stampede over the carpet, and the camels would laze around on the top of the coffee table. 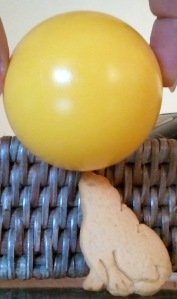 Many of the animals were pretty talented, the seals were master ball balancers and there were dancing bears. The tigers could jump through hoops of fire! Then there were those animals I never could figure out what they were. Is that a sheep? A llama? I don’t think they have sheep in a circus, so llama must be the logical answer. It sure looks like a sheep though. (I found one in this box, and as an adult I still couldn’t figure out what it was.)

One minute you’d have a perfectly well behaved monkey with all his appendages and such attached, just happily eating a banana and the next minute he’d look like this.

I don’t know why, but the heads had to be bitten off. I doubt I was the only one who did this. Even with the box I bought last week, I found myself the giant attacking the animal kingdom devouring monkey and camel heads left and right, leaving a scattered mess of decapitated bodies. Oh, the humanity. Speaking of, the camel population of this particular box was thriving. I was a little disappointed, nothing offensive to the camels, but they just lay around. I didn’t have any elephants which was a bummer, though I did get a tiger. And of course, that one mystery animal. Oh how you taunt me, mystery animal!

I think I’ll be making trips back to the store where I found the boxes, I need some boxed animal crackers in my life once in a while. If not for the great memories of my Gramma and younger days, then at least for the head biting.

2 thoughts on “Off With Their Heads!”