Attention spans are wonderful things. Too bad they are noticeably lacking in society today. I would appreciate even a small attention span, going to dinner with someone or walking along having a conversation without them looking at their cell phone, sitting down to watch a movie in its entirety without needing to log on to the Internet, and so on. So I’m reaching here when I suggest watching silent films. An activity that not only requires one to read (how dare I suggest such a thing), but paying attention to body language, facial expressions, and a story entirely dependent upon the viewer actually grasping it. Plus, there are no explosions to distract you and no computer generated creatures to stifle your own creative insights. Forgive me for wanting you to use basic reasoning skills, an imagination, and an awareness while viewing a film.

I thought I would start with a couple of my favorite horror films. (With other installments for other genres to come.) If you are of the minority (as I am) and love silent films, then you most definitely know about Nosferatu (1922) and The Cabinet of Dr. Caligari (1920). If you are of the other or some how think silent movies are “dumb” or “too old”, then you are greatly missing out (and mistaken).

For those who haven’t seen Nosferatu, it is the story of Dracula. Pretty simple. Although it is a German expressionist film, it doesn’t carry heavy signs of it. That fact makes it no less beautiful in it’s scenery and lighting, nor it’s artistry. The use of shadows, sweeping shots of the sea, and towering buildings all speak to an expressionist subtlety. 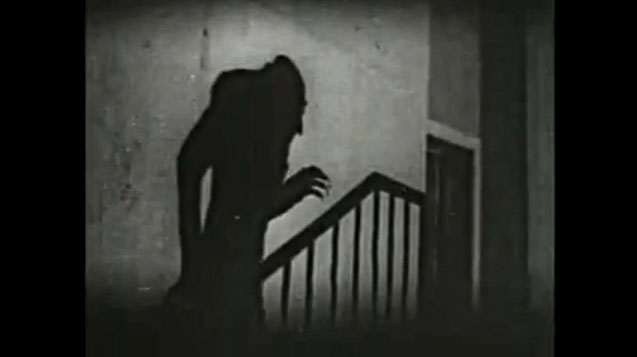 He’s coming for you.

Count Orlok/Nosferatu must be one of the creepiest portrayals in all of movie history. The makeup by today’s standards is probably pretty comical. (But, honestly, most horror makeup, even in newer ones, is pretty comical.) 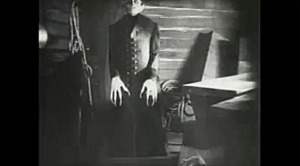 One of the best shots in film history.

His blank stare, protruding teeth, and elongated fingers and figure exudes an uneasiness while he seemingly floats through the movie. When he is being transported on the ship, he slowly rises from his coffin, stagnant and stiff. That scene always causes me to shudder. He is accompanied, not by bats, but rats. He himself a reflection of a hairless big toothed nibbler.

He travels the sea bringing decay and darkness with him. He takes up residence in the house next door to the Hutters. Peeping out the window, with a dead desire for Ellen. If the 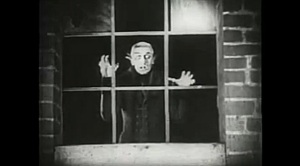 Stop looking at me!

thought and picture of him standing next door looking at you through the window isn’t enough to make you squeamish, you are more courageous than I. And that scene when he finally is invited, by windows thrown open, to come to Ellen, he slinks his way over and up the stairs, casting that unmistakable shadow.

The other thing to keep in mind when watching silent movies, is that this was the beginning. Their model for acting was theatre. So while it may look campy or exaggerated this was the brilliant beginnings of acting and filmmaking. The exaggerated and illogical were also trademarks of German expressionism. 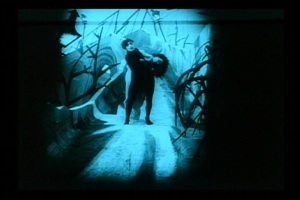 The Cabinet of Dr. Caligari is a visually stunning picture of suspense. It is pure expressionism at it’s best. Crooked doorways and windows, winding stairs and pathways, and criss-crossing shadows. A presentation of disjointed imagery that speaks to the disturbed and mysterious characters and events taking place. (Which becomes clearer at the end. Of course, I won’t give it away.)

Dr. Caligari is part of a traveling carnival. His attraction: Cesare, the somnambulist. Under hypnosis he obeys commands and even predicts the future. A prediction of death comes true, which leads everyone to suspect the hunched Dr. Caligari and his pale friend who is kept in a coffin-like cabinet, of depraved deeds. The viewer is led through twists and questions of who, what, and how. Again, I can’t (and won’t divulge) the ending, but this film was the first to utilize the “twist ending” we are so accustomed to now with thrillers.

Don’t look into his eyes!

One can see the heavy influence this film has had on movies that came after it and contemporary filmmakers, most notably Tim Burton. Burton’s visual placement and design is remarkably like that of this movie. And Edward Scissorhands IS Cesare but only with snipping fingers (and minus the sleepwalking).

These movies are so enjoyable, if you can allow yourself the time to invest in them. Once you do, they suck you in. You almost forget you’re reading the subtitles, or that every second of the scenes is accompanied by mood setting music, or that it was made before technological advancements. 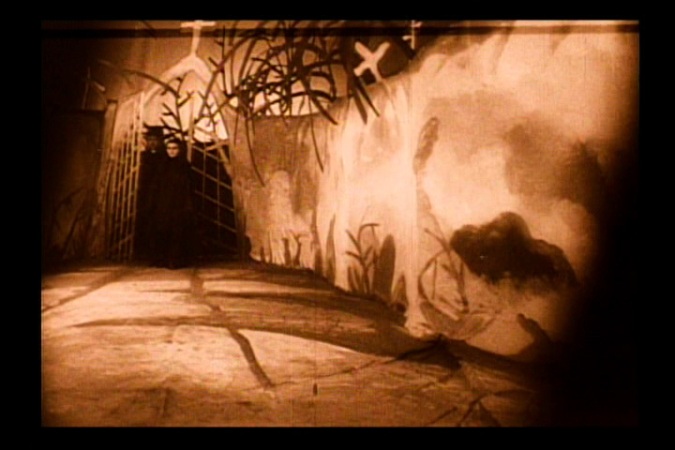 It doesn’t even have to be good when it looks this magnificent. (But it is.)

I’ve discovered you can watch both of these movies on YouTube in their entirety. Quality and version are another story. Since most silent movies have been cleaned up and re-released with different musical scores, it can be iffy finding the right one. The musical score is such a vital part, you don’t want to get a version with a wonky sounding and out of place score attached to it.

However, I own both. So while I’m air popping some popcorn and dimming the lights, make your way over. There’s plenty of room on the couch.

258 thoughts on “It Requires An Attention Span: Silent Horror Films”