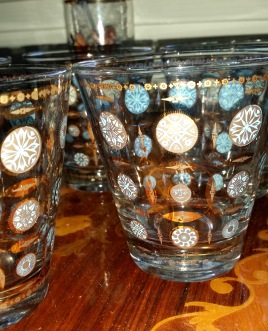 Cocktail hour is made more festive with the right set of glasses, and infinitely more when it’s a set of mid-century bar glasses. Case in point, the set of blue and gold glasses I happened upon at the antique mall four blocks from my house. My delight was beyond words. They were beautiful, they were a fun shape, and best of all, they were of the same color way of the vintage ice bucket I had found just weeks before at another antique mall almost an hour away. I couldn’t believe my fortune!

They make a handsome addition to my bar cart. Displayed along with the ice bucket and martini pitcher, it shouts, “Let me entertain you!” (Cue, Gypsy!) They’re also a fantastic size, perfect for a number of different drinks. And look especially fetching with a lovely piece of garnish.

I’ll admit, I love them so much I drink less potent things out of them often. Water, chocolate milk, ginger ale. . . Any excuse to use them! I mean, look at them, how could anyone leave their hands off of them?

I recently acquired a new set of glasses to complement them. They’re a smaller size and in white, but of the same shape and still possess that same inherent cool “let’s have a drink” energy as the blue gold ones. 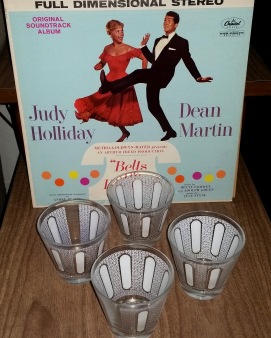 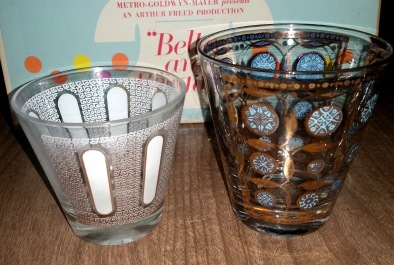 I have one particular friend who was continually remarking on the blue gold glasses each time she saw them. So when she told me she’d be moving into a new place in Septemeber I knew the perfect house warming gift would be a set of her own. I went on a search to find a set that would be perfect for her, and wouldn’t you know, the first place I looked had a set in red that just had her name written all over them. However, because it was the first stop and I didn’t want to buy the first thing I saw, I left them and continued my search over the next few weeks, but never unearthing anything else that spoke to me so clearly. Of course, I returned to them (happily they were still there) and gave them to her a couple days after she moved. Luckily, she loved them and even told me they reminded her of a set of red and gold glasses her Grandma had had, which made it all that more satisfying. 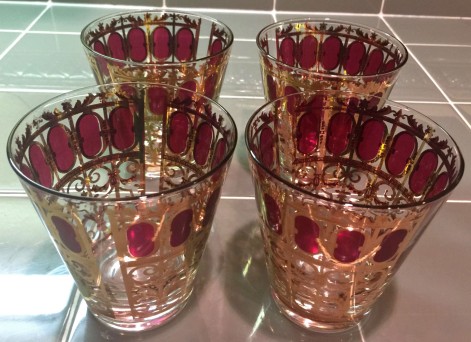 Though the need for bar glasses is nonexistent at this point, I have a feeling I will be adding to my assortment of vintage bar glasses in the future. When I see a set of cool, mid-century glasses, I can’t help but visualize them on the bar cart or in my hand with a tasty concoction of giggle water. Especially when they are ones that scream at me, “Buy us! Take us home! Let’s be friends!” (No? I’m the only one the objects talk to? . . .) I don’t think having a varied collection of these glasses is the worst thing one could accumulate. At least, that’s what I’m telling myself.

3 thoughts on “To Hold Your Giggle Water”